Mercadona, the supermarket and online shopping company, will complete in April 2019 the definitive replacement in all its stores of the current plastic bags by paper bags, raffia baskets, and reusable and recyclable bags that are also made of 3,000 tonnes of plastic from the packaging recovered from its stores. This latter option involved the collaboration of customers, employees, and suppliers to launch this Circular Economy initiative for the optimisation of use of resources, as well as reduction, reuse, and recycling to extend the life of materials and prevent them from ending up in a landfill. 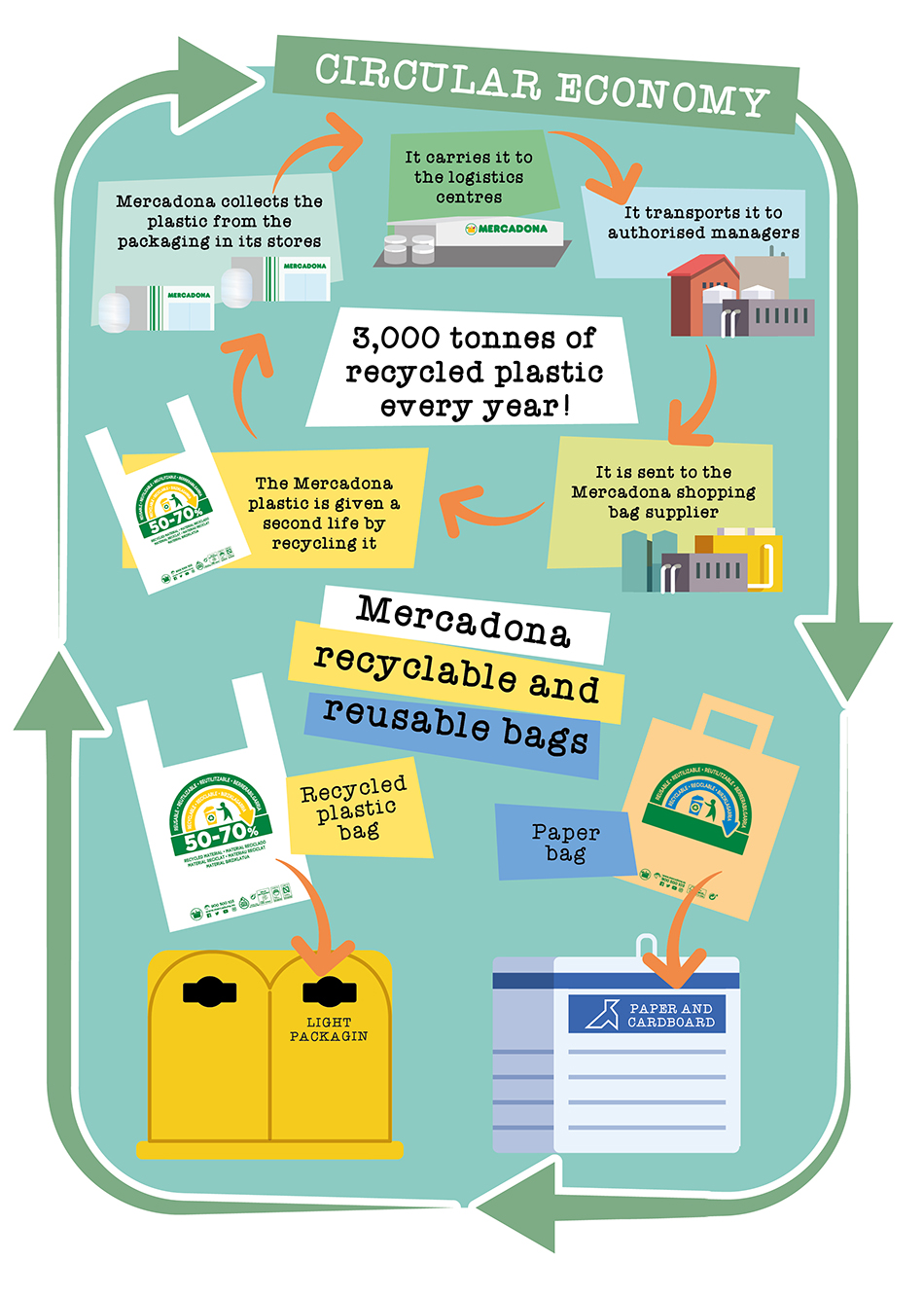 The goal is to gradually implement this measure, which was launched in 2018 in 66 stores in Valencia, Biscay, Barcelona, Cantabria, the Balearic Islands, Ceuta, and Melilla in the rest of the chain. The extension will start in February in Catalonia, Madrid, and Navarre, and will gradually reach the chain's more than 1,600 stores in mid April.

With this measure, “The Boss” (as the company internally refers to its customers) may choose from among the traditional raffia bag at 50 cents, a paper bag at 10 cents, and a plastic bag made of 50% to 70% of recycled plastic, also at 10 cents, to do their everyday shopping.

Bag made of 50-70% of Mercadona recycled plastic

The company has also installed a new piece of furniture for the plastic bags used by the “Bosses” in the fresh products sections, with a new dispenser system that reduces waste. The replenishment mechanisms is easier and more intuitive than the previous one, making this task easier for the section employees. These bags are also scheduled to be replaced by compostable ones by 2021. Meanwhile, in the company’s commitment to reduce its plastic consumption, the precut area to reduce the amount of plastic remaining in the support, which was discarded, has been removed.

In this way, Mercadona has reinforced its support for sustainability, a commitment which led it in 2011 to become the first company in its sector to introduce initiatives to reduce the use of single-use plastic bags, and, one year earlier, in 2010, to become a pioneer in the recycling of plastic, through projects such as that jointly undertaken with its Totaler supplier, SPBerner, to include a new household cleaning line (buckets, basins, broomsticks, and mops) make from plastic recovered from greenhouses.

One of Mercadona's commitments to society is to give back part of what it receives from it. The company's Social Responsibility Plan is developed with the purpose of serving the social and ethical component of society by means of different types of sustainable actions that reinforce its shared growth intent. As part of this policy, Mercadona is working on the Sustainable Urban Distribution Project, on the improvement of air quality in our cities by means of lorries and vans propelled by cleaner, more efficient technologies, as well as on the construction of garden roofs and vertical gardens in its stores.

Another strategic line of Mercadona's Social Responsibility Plan is environmental sustainability. To this end, Mercadona has its own Environmental Management System, focusing on logistics optimisation, energy efficiency, and waste reduction. Part of this system is based on the principles of Circular Economy, and, together with the Totaler suppliers, seeks to turn waste into new resources.

Since 2009, Mercadona has been a member of the European Forum of Distribution for Sustainability (REAP), and organisation co-chaired by the European in which all participants are externally audited on a regular basis regarding sustainability. It has also been a partner since 2011 of the United Nations Global Compact for the defence of fundamental values regarding Human Rights, Labour Standards, the Environment, and Corruption.

Previous article
In 2018, Mercadona and its transport suppliers are set to invest a further 4 million euro in clean energies
Next article
Mercadona Animal Welfare Policy

They allow users to browse a website, platform or application and utilise the different options and services they offer, such as, for example, monitoring traffic and communicating data.

They make it possible to quantify the number of users to be able to measure and perform statistical analysis on the website.